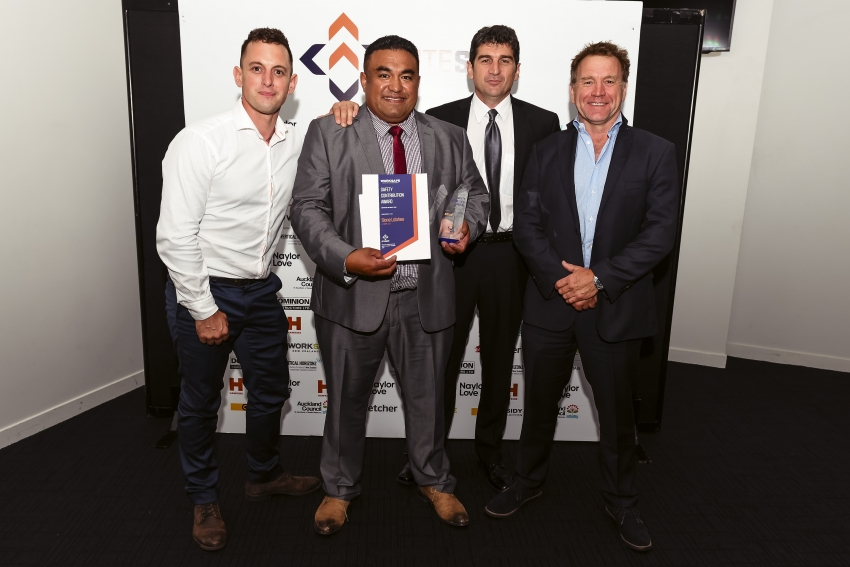 APS nominated Sione Lolohea for the Contribution to Safety Award at Site Safe's 2018 Awards Night.  We were thrilled for Sione to get into the finals and even more excited that he won the award!

A builder by trade, Sione was recruited into the heights team eight years ago. After an early mistake where he was spotted wearing an unattached harness, Sione was quick to reform his ways and adopt the APS approach to safety.

It was a change of attitude which probably saved his life, David Karam, APS General Manager says.

“About 12 months later, Sione was installing a fall arrest system on a brittle roof, when the sheet exploded, and he fell eight to 10 metres towards the concrete floor. Thankfully he had installed a temporary fall arrest system which stopped his fall in mid-air. He was able to abseil to the ground without a scratch.”

His lucky escape made him an overnight hero within the company, David says. The near miss experience also gave Sione a unique advantage as the senior heights trainer he went on to become.

“Having had that experience gives his training such a level of realism. He’s become an invaluable team member and made quite a cultural shift for both himself and for those around him.”

Sione now works with all new abseilers as a coach and mentor, and he inducts new employees into the heights team. In his role as both site supervisor and trainer, Sione has become an “incredible role model” for the rest of the team.

“For us, we are able to utilize his skills and mana to our advantage – we can get up and preach about safety… but nothing brings it home to the guys like his story about that near miss experience – and how if he hadn’t learnt from that he would have been dead or crippled today. There’s so many guys that think that they are bullet proof, and Sione has a great story to tell them.”

Encouraging and promoting leaders like Sione is a central part of APS’ safety philosophy. “The thing that changes safety in a company are people like Sione,” David says.

“At APS we’ve developed and raised the profile of leading hands - increased their mana, respect and pay. The leaders of safety at APS are the Siones of the world.

For Sione, winning the Site Safe award was a big honour, but it’s really all about helping his team mates.

“I like to share the knowledge and skills that I’ve gained in health and safety, and what I’ve learned so far at APS” says Sione.

“Every time we are up on the roof, we are putting ourselves on the line, so we need to trust each other and know that everyone is taking safety seriously.”

Call one of our team now
for your next project